← Weekend Links :: Longest Edition Ever Why Do We Really Dread the Drop-In? → 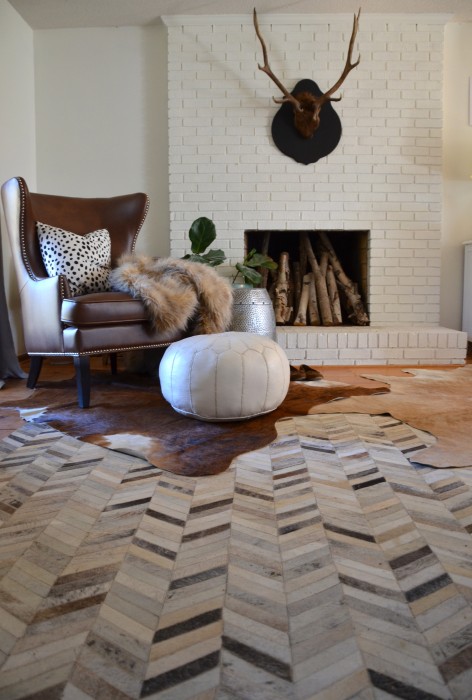 Most things I do in my house aren’t a result of a carefully thought through plan where I get to make decisions based on the perfect scenarios.

You know that right?

Most design decisions are a result of using what I have when I have it and making the most out of that. Isn’t that pretty much how life works?

I didn’t layer my rugs because that was my master plan. I layered them because I already own rugs I love and I don’t want to buy new ones and three months ago we moved to a new house with a different shaped family room and my rug didn’t cover the same amount of floor space. 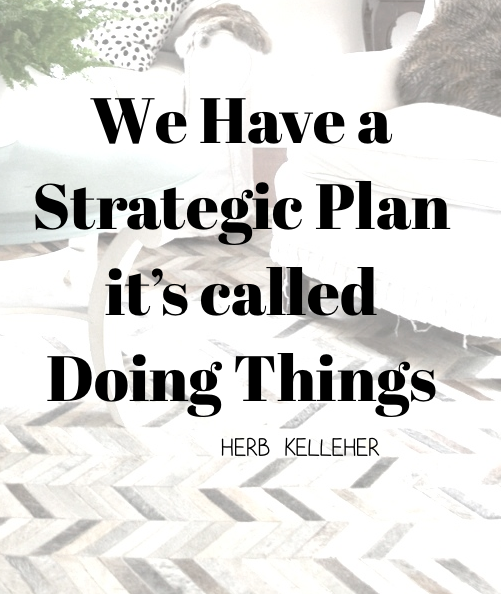 It’s the same with my kitchen. I didn’t put Ikea cabinets next to a Viking Range because I think that’s the ‘perfect’ design choice. I put Ikea cabinets next to a Viking range because that’s the best choice for me right now, a girl paying cash for a kitchen who happened to find a Viking for a steal. A girl who’s out of debt thank-you-very-much. A girl who’s lived in rentals with dark kitchens and who more than anything else needs LIGHT while she cooks. I guess I could have not purchased the high end range so that my cabinets would be more in the same league as my stove, but living by that kind of self-imposed rule just seems sad. </end rant>

So now I have a lovely limitation–lots of rugs and none of them big enough alone to cover my room and no rug budget to buy a new super big rug.

The world is not our oyster. Thankfully.

I don’t ever get to start with a truly blank slate from which to do anything. And neither do you. Instead of cursing the limitations, I’ll embrace them, cling to them even because there are so many beautiful ideas in the world, I NEED a limitation just to get me out of my indecision rut!

Instead of thinking it’s wrong or bad to put way too many cowhides in my undone family room, I decided to see if I can take the challenge to make them work. Why? Because it’s what I have. 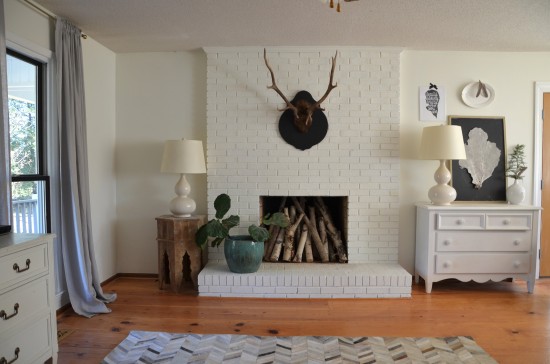 I like my sofa to be grounded by sitting at least a few inches on the main area rug. When the sofa (opposite the fireplace wall) is sitting on the herringbone cowhide I get a big gap in front of the fireplace. It’s too much room left unrugged to ignore but I also don’t want to have a floating rug and I want to avoid buying a new rug. Rugs are one of the purchases I don’t mind spending money on, but if I can reuse a good rug then I’ll do my best to do that. 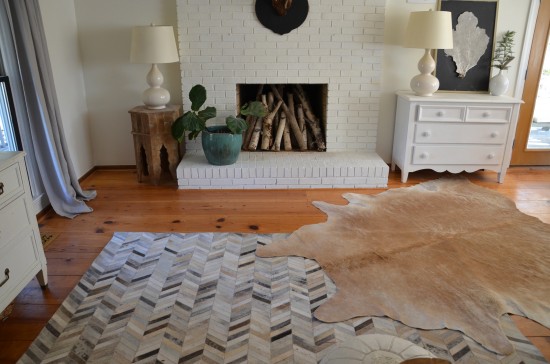 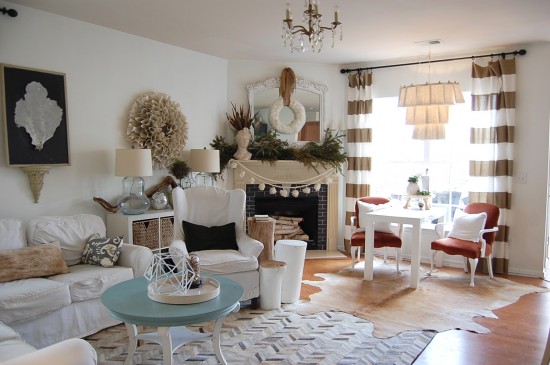 In the old house, see how massive the big cowhide is? It fit nicely there because we had an angled fireplace to the left. and that unrugged space on the right of the photo actually worked for us in the room because it was a walkway. 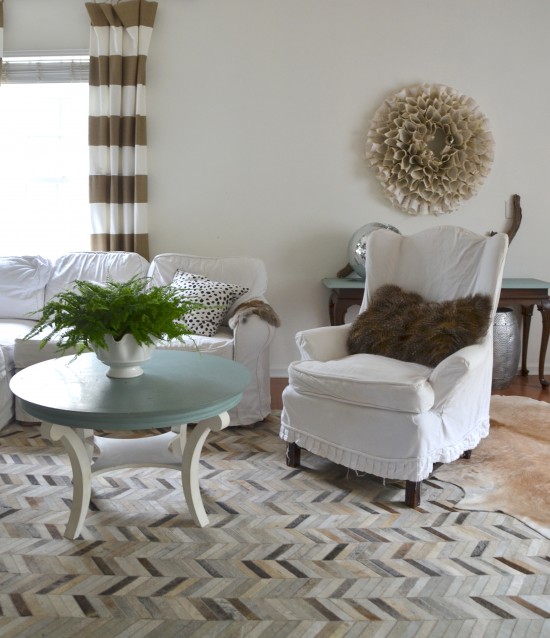 These rugs work great simply layered right on top of each other because they are thin rugs, if this rug was a deep pile it could look weird or trip someone. 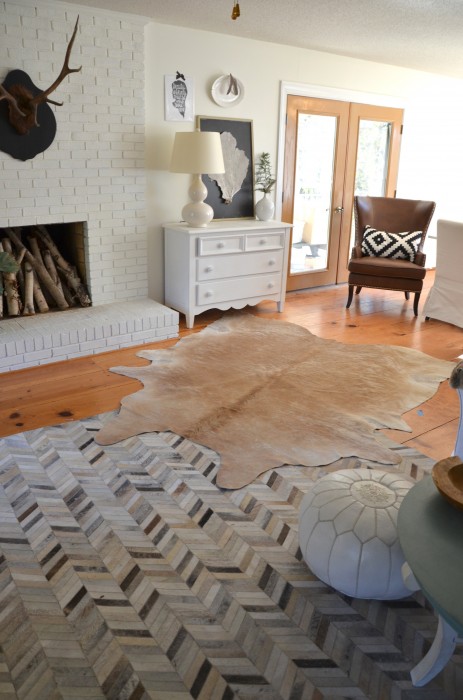 Our new family room is much smaller but it lets me use the cowhide to lead into the next part of the space, the dining area.

But them I’m still left with a pretty big, empty, unrugged space on the left. That corner piece of the herringbone rug happened to be situated right where your feet land if you are sitting in the chair that goes in that space. It was awkward. And even though I have plans for a shelf back in that corner and I promise my two identical lamps won’t be uneven like that, it won’t change my rug woes. 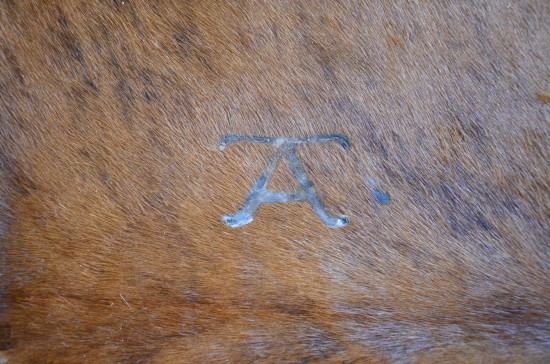 Meanwhile, I ordered a black and white cowhide from Joss & Main to go downstairs in the basement. I’ve always had really good experiences shopping online–I now buy almost ALL of my rugs online, but this time, when the rug was delivered it was very brown. And even though the disclaimer in the description said the coloring could be different, I figured since there were other rugs for sale with different colorings that they’d be organized to have black and white and brown once ship to the people who clicked on that photo to purchase.

ANYhow, my black and brown and white rug came and it was very, very brown. But it had one redeeming quality, a brand! I’m a sucker for an imperfection like that so suddenly, I knew I didn’t want to try to send it back because how lucky was I to get a rug with a brand!?! Score!

And then I remembered that cold, empty space in the family room. 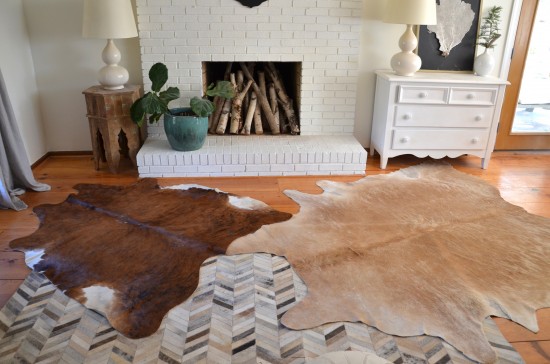 So he got layered onto the family room floor. And I admit, at this point it looks a little wonky. It’s too much. Too many outlines and fifty shades of brown, too Pangaea-ish. But we can’t let ourselves stop when a room is 30% finished and decide something isn’t right. Especially when that something is paid for and already in the house.

Can I get an amen?

It’s better just to go ahead and see how it will all look if it were finished out. 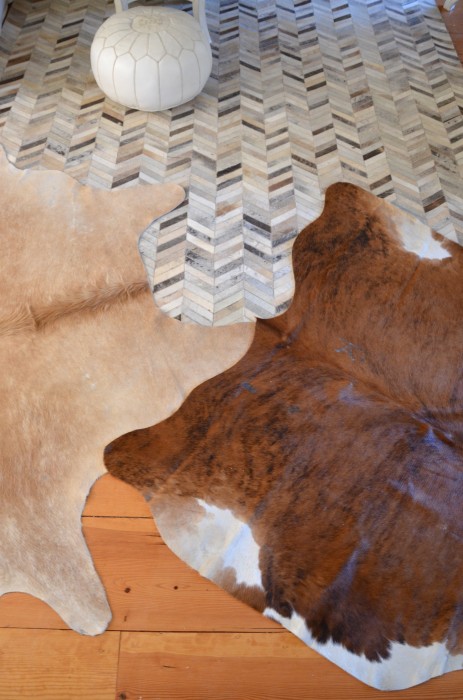 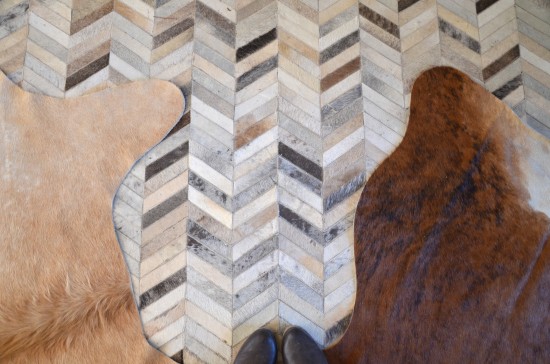 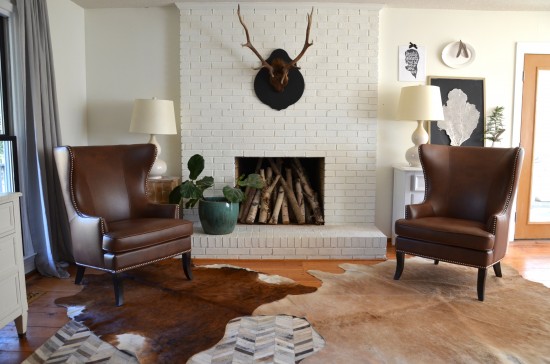 With our chairs, better…

…and with our stuff, suddenly my eyes no longer focus on the exact lines of all the layered cowhides but instead I see the space as a whole. It’s cozy, it’s layered, my floors have a pleasing amount of rug coverage. Win!

As far as resources go…

The dark cowhide on the left is from Joss & Main it was $180 which is a great price for a cowhide, but it’s also a smaller hide and of course, I got lucky and was able to use a rug that didn’t look much like what I thought I had ordered.

The light colored hide on the right is almost twice as large. I bought it online last year during Rugs USA black friday sale, It was $185, last year they had 75% off lots of rugs with FREE shipping!! A really, really great deal! If you want a cowhide, this is the best deal I’ve found, besides my three legged cowhide I got at Metrolina for $60–but I just got lucky with finding a three legged rug at a deep discount (said no one ever in the world but me). My house is such the island for misfit decor. 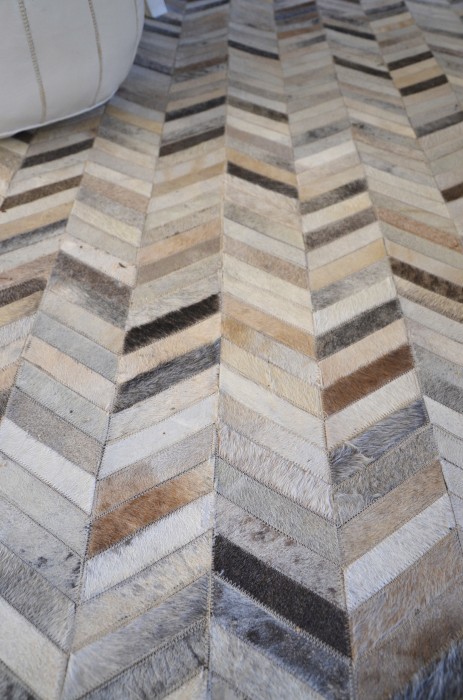 The rectangular herringbone rug is made of sewn together scraps of cowhide. It’s my favorite rug ever. I bought mine at Joss & Main (they have some other versions on sale through the 21st at their Modern Lodge sale). One thing about shopping at Joss & Main and some other online retailers, double check on their return policy, most rugs I purchase are non-refundable (and who wants to try to mail back a rug anyway?). I tell myself if I can’t use it, I’ll be sure I’m buying it at a good enough price that I can sell it on Craigslist. 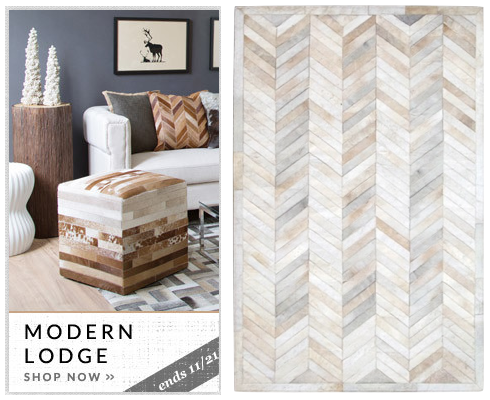 I just spent a few minutes on google looking for some other sources for patchwork cowhides:

Sunland Home Decor (you can pick just about any size and they’ll make it for you!) their rugs are priced by the square foot and you have lots of design options

Etsy has a ton of patchwork cowhides

I ADORE cowhide rugs, with three boys and a dog they’ve really held up well. They’ve been barfed on, spilled on and treated badly. And if you move and don’t want to throw away everything you own and start fresh, they can work in any room and be layered