Making Over a Renter’s Kitchen 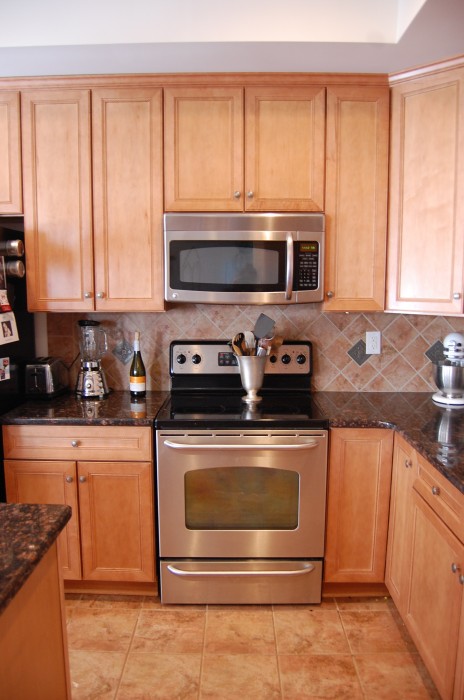 the right corner up there with the mixer is where I do half the kitchen work, in the evening it was DARK as night

This is the second nicest kitchen I’ve ever had.  But it’s not mine.  It’s not mine because we rent, but it’s also not mine because it is simply not what I would choose for a kitchen.  Although some of the materials are lovely, they aren’t my taste.  I’d almost rather have a kitchen with old stuff so I can fix it up and not feel bad about it. Almost. 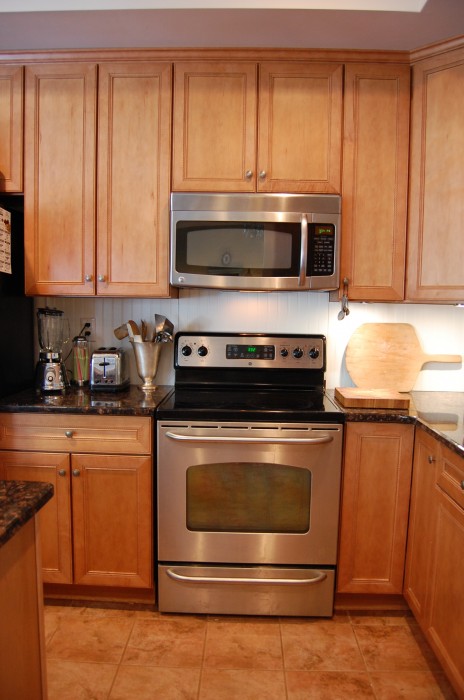 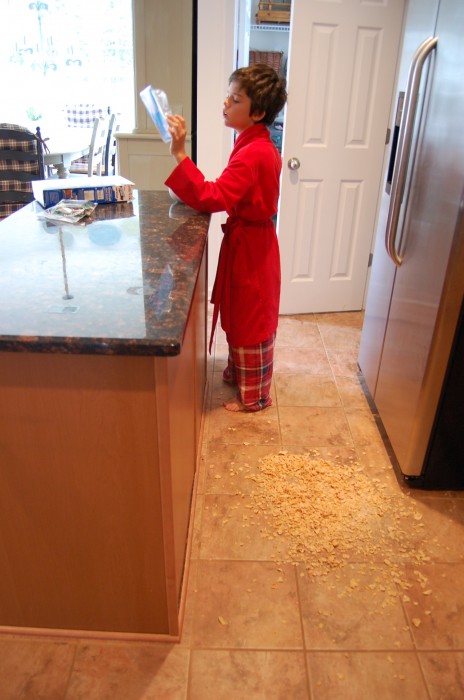 Our kitchen doesn’t have a window but, the adjoining breakfast area is all windows. However, because of the black {and pink} granite, when you get to the far corner of the kitchen where I actually work and roll out pizza dough and measure ingredients, it was really dark.  Plus, everything in the kitchen has a pink undertone, the wood cabinets, the floor, the granite and the backsplash. 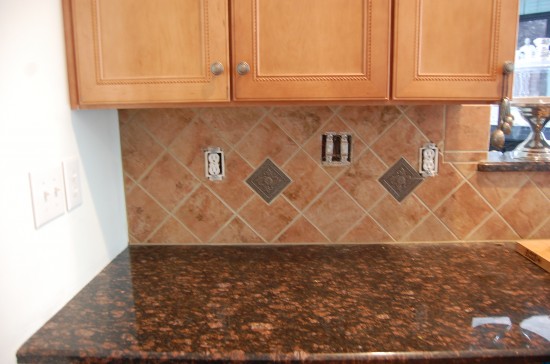 We decided to put up some white beadboard to break up and neutralize the pink.  Beadboard is inexpensive and we had all the measurements cut at Lowes/Depot, I can’t remember which.  We came home and took off the outlet covers. 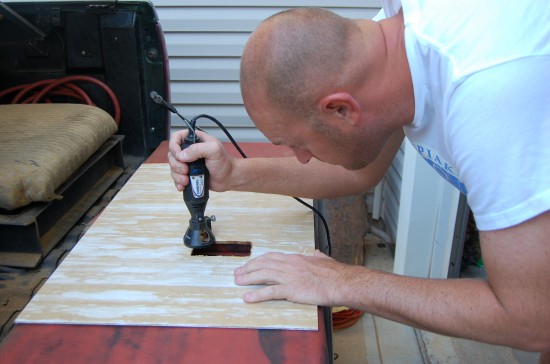 My husband used a dremmel or something to cut the holes for the outlets. 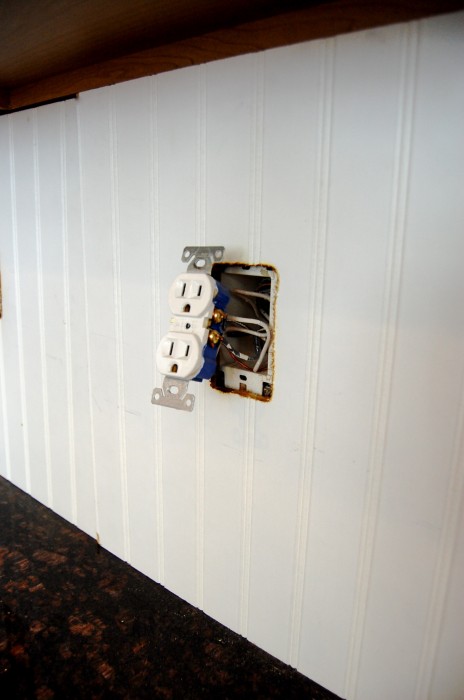 Perfect fit.  The beadboard was such a good fit that it almost stayed in place by itself.  However we did need to secure it.  This is the part where some of you will file a lawsuit against me.  Because we are renting, and because this is just to be a very temporary cosmetic change, and because in a few years when we move out, I will want to re-expose the tile again because I think the owners would prefer that look, I needed to put the beadboard up in a way that it could VERY easily be removed.   Most of you can guess what I did. 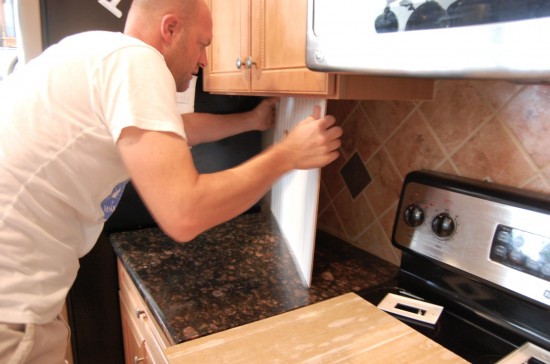 Or actually, what I had him do.  We hot glued it.  Once again, hot glue serves as a perfect temporary holder of things.  It will stick as long as you want, but, when you are done, it peels right off. 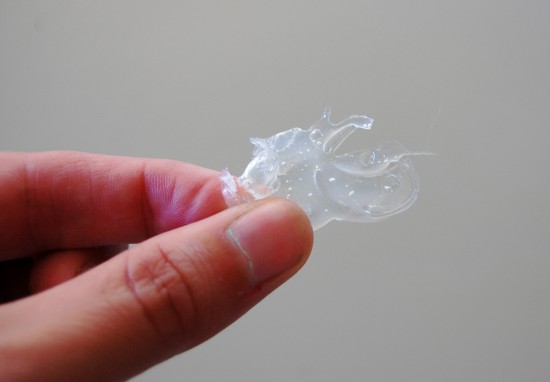 You will want to do what I did and test an area first.  A few weeks earlier, I globbed on some hot glue on a hidden part of my tile and let it sit for a week or so.  Then, I went an peeled it off.  I used the end of a metal spatula. 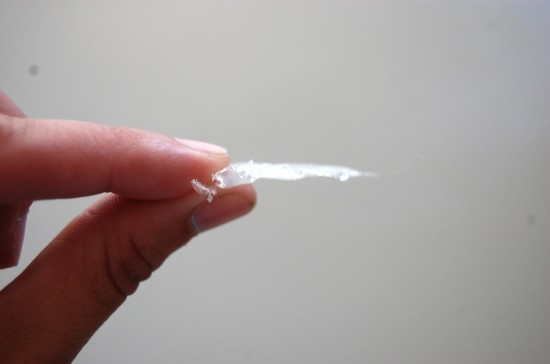 The glue came off all in one piece, and it was really easy once I got a little edge up. Don’t underestimate the qualities of hot glue. 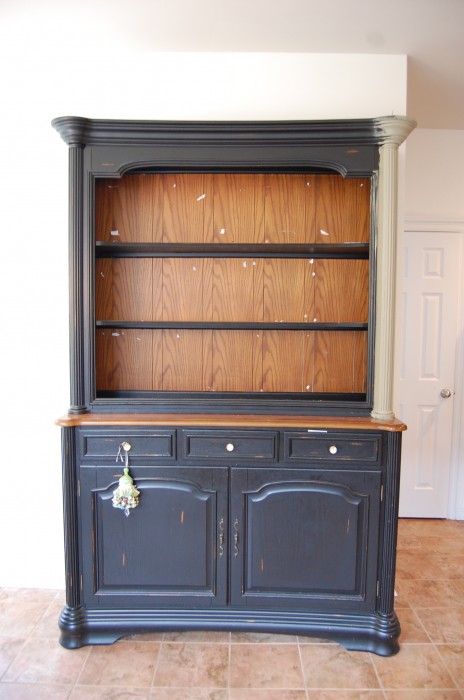 Here’s another example of my hot gluing ways.  Three years ago I hot glued some scrapbook paper to the back of my hutch.  Last month I tore it all off so I could paint it.  The scrapbook paper stayed on through two moves.   See all the places where the glue was? 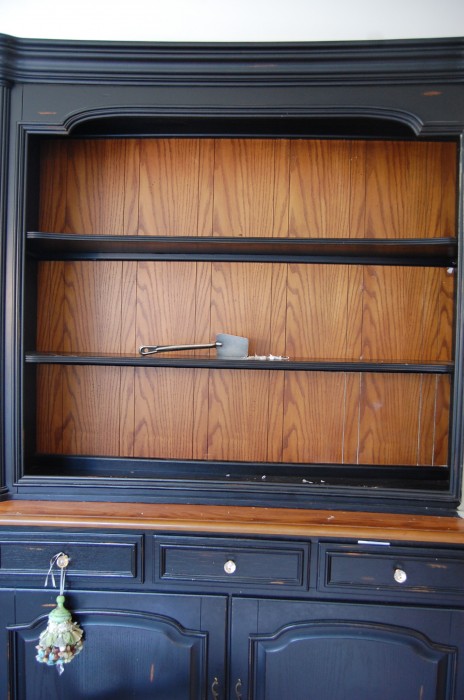 Here’s the same hutch 5 minutes later. I used a spatula to help pry up the dried glue. It just popped right off and didn’t damage the wood at all–so it for sure will not damage the hard tile in my kitchen.  Hot glue is a good friend, it is very forgiving. 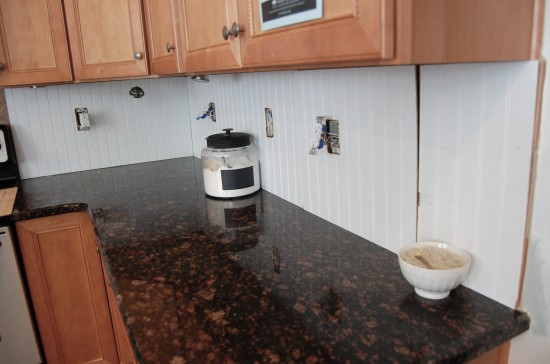 When you are working with hot glue and something you think you might want to remove later, make sure you apply the glue in a few large globs.  It’s much easier to remove an inch circle of hot glue than a million tiny little dots and lots of thin lines of glue.  For each of the pieces you see here, we did a glob on each corner, that’s it. 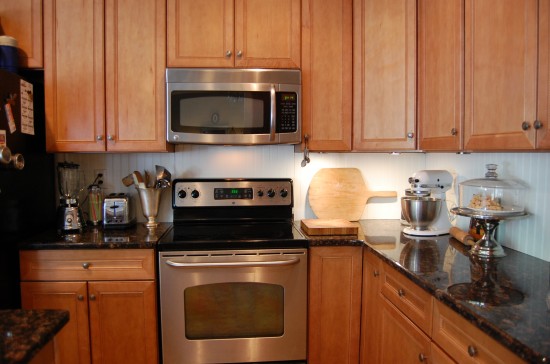 The beadboard is more calming and just white as opposed to the light sucking, diagonal multi-toned tile. We did put a coat of paint on it to help protect it and make it easier to wipe down, especially over by the sink. 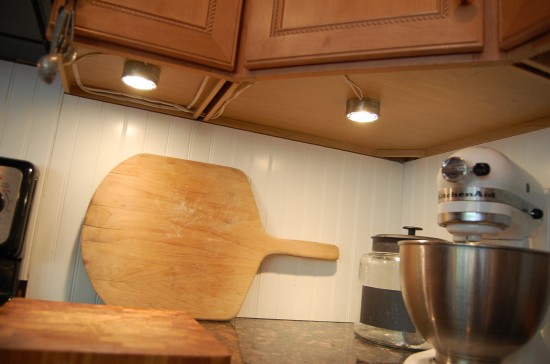 We also put up these little lights from IKEA.  They were less than $30 for a set of 3.  And they make a world of difference in my dungeon corner. 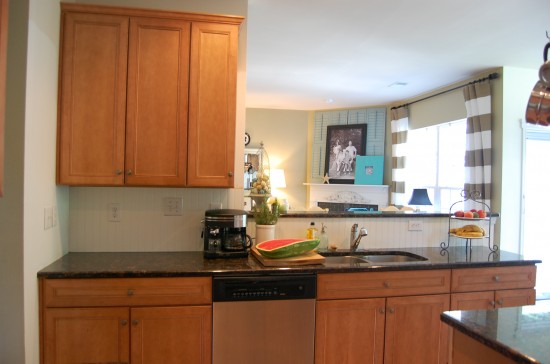 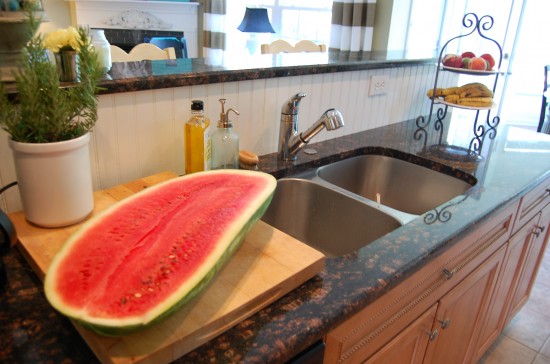 And for the record I don’t always have a large, overly ripe watermelon setting out on my counter. 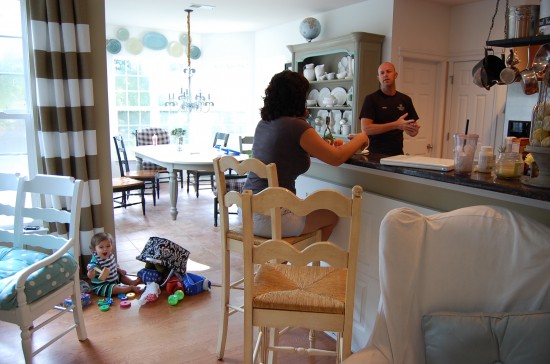 I think the kitchen feels a little more like the rest of our house now. 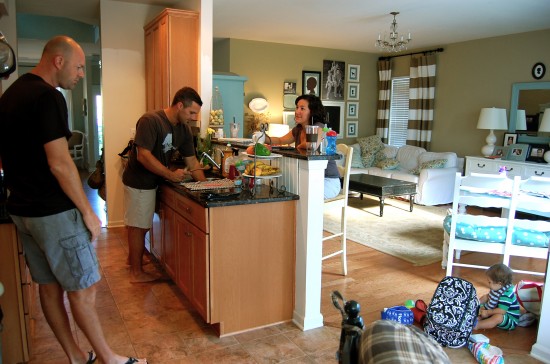 I had to force my husband to allow the beadboard to be imperfect.  See that place up there where it ends at the end of the counter?  We could put some molding or trim there but, I’m ok with it how it is. If it drives you crazy and it’s worth it to you, by all means, finish it off.  You can also see where I have yet to finish painting the wall of the kitchen {just a little whiter shade than before}.  I’ll get to that very soon.  For now, I’m enjoying a kitchen that is more me, for less than $100 that can easily be changed back when we move out.

For those of you who want to put your beadboard up permanantly and correctly, Thrifty Decor Chick can coach you much better than I can.