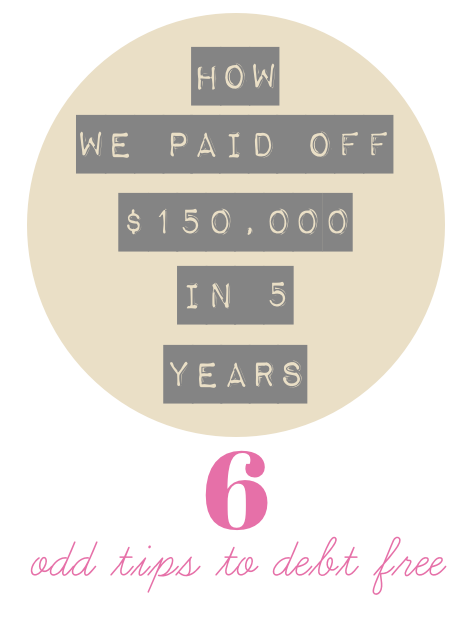 We finally did it. I mentioned in last year’s goal post that we hope to be debt free this year. Both my husband and I were self-employed for all of our debt paying off years so we never make the same amount twice in a row. Figuring out an exact date to be debt free was always a little difficult. But we paid off our debt in October of 2012 right before the Big Sale. 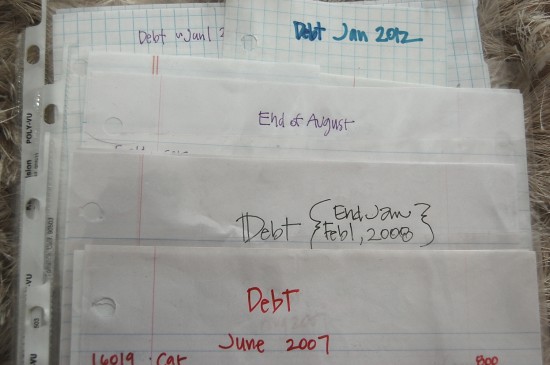 I’ve written about our story here and here so I won’t bore you with the details. Here’s the one sentence round-up: Lost a business or two, ended up with over $150,000 in mostly business debt and also my car. The sad part, it wasn’t even fun debt like clothes and vacations, the good part, I never got used to an expensive lifestyle. It took us fiveish years to pay that off and the math really doesn’t add up. Along the way we had some super hard years where we had to settle a couple smaller debts and we even had a really generous family member who surprised us and  forgave a debt that equalled about 10% of our total. But it’s paid. I’m not an expert but I’ll share what worked for us. 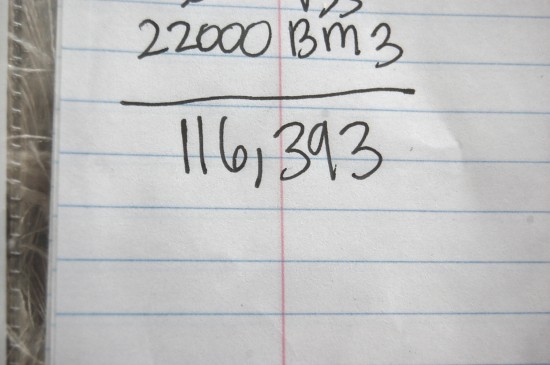 1. I Helped However I Could.

Five years ago that meant I had a preschooler and one in half day kindergarten so I didn’t work but, I cut coupons like my life depended on it. And to this day I believe that my sly couponing skills really contributed to our family’s budget. It’s the first thing I tell moms when they ask me if they should start a blog “to make a little spending money”.  Blogging usually doesn’t pay–it took a year before I even knew blogs could make money, a second year before I actually did make money, and a third before it was more than a percentage of minimum wage compared to the time I spent. But couponing? Cutting coupons and cooking from the pantry is a great way to help out the family. Some of my favorite coupon websites are Southern Savers (if you live in the south) and Money Saving Mom. My stores of choice: CVS, Harris Teeter (double coupons!) and Target.

There was about a year when my trips to CVS were the highlight of my week because it was so fun to feel like I was beating the system, not to mention I got to have nice razors and shaving cream–sometime I still have a hard time spending money on things like that. I couponed until I couldn’t justify the time. Now I write blog posts instead. I have a friend who owns her own business but, she loves the idea of couponing so much that she hires someone to cut them and shop for her–the money she saves more than pays for the work done.  I think that’s a great idea!

By the end of our debt-paying-off-experience this blog was funding all of our debt payoff. Thankyouverymuch. 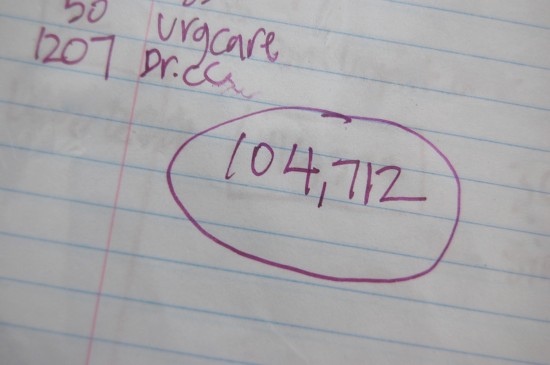 2.We STOPPED Going Into Debt

Once we moved to Charlotte and faced our debt we cut up the credit cards and did not have the option to go into more debt.

There were a few times we has small unexpected medical expenses of one or three thousand dollars that we had to add in and pay off over time. And one year we had a much bigger tax bill and had to pay that off over the next 12 months, but other than those, this is not a story of debt going up and down–just a story of debt slowing, steadily going down.  You cannot pay off your debt while you are continuing to go into debt. 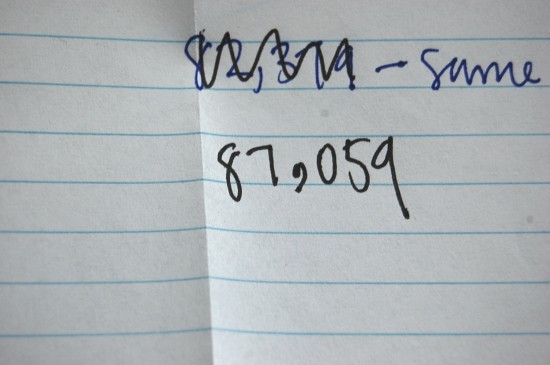 We followed Dave Ramsey and his baby steps for the most part. We looked at each debt separately and paid down the smallest first with any extra money while paying the minimum on the other debts. Once we paid off the smallest debt, we went to the next one and threw all of our extra money at that debt while paying the minimums on the others. It worked for us and helped us have little wins in the beginning which was good motivation.

But we were also flexible with some of our spending. I’m the tightwad, my husband is the free spirit. So we took a family trip to Atlanta a few years ago, bought season passes to a local amusement park last year and even sent our kids to a three-day a week private school. The school part was only made possible by this blog, something that afforded me more time to write more which in turn builds my business=tightwad approved. Other than Atlanta, our family trips were only possible because generous family members let us vacation at their beach condo or invited us to come on their vacations with them. I’ve even been known to bring my family along on a blogging conference and call that a vacation. Our boys loved going to Allume last year! 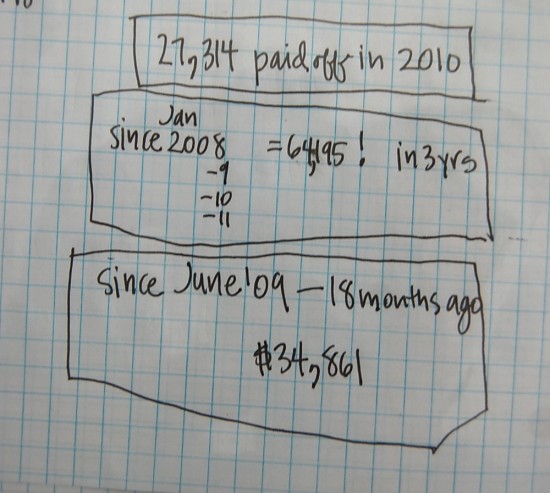 When we were frustrated, I’d go back to the beginning and add up all the debt that we had paid off and then compare that to the number from six months ago. That always made me feel like were still moving, even if both cars needed tires and even if it was February or March–always our tightest months. I’d usually call my husband and make him guess the number and he would always underguess (I’m going to pretend it wasn’t on purpose) it was a great feeling to see the amount of debt we had paid off keep rising even if we felt like we were stuck.

5. Have Two Separate Banks One For Everyday, One For Savings & Sinking Funds

After reading a post Tsh wrote about her online banking at ING Direct I opened an Ing savings account in 2009. That’s when our debt paying seems to have taken off because for the first time in our lives, we had a place to squirrel away and group our money.  We used a different, main bank for our living expenses but everything else went into the ING account. Before I created a separate account at a different bank, I’d deposit all of our money into one bank, make a big plan, but if I didn’t follow through in the next few days, somehow the “extra” debt paying off money and future car repair money that I deposited would shrink. So now I try to only put in what we need to actually live. Money for bills and gas and groceries go into our main bank and everything else goes into the secondary account at a different bank. Direct deposit and photo-snapping checks on my iPhone make that a no-brainer.

At ING Direct you can have a checking account and up to 25 savings accounts so we opened a slew:: debt pay off, car repair, hockey, emergency fund, clothes, braces and kids accounts. It was the first time I had a real place to ‘hide” our emergency fund money. It was still easy to access, I had a debit card for the checking account, but since it wasn’t in our main bank it felt different and I wanted to protect it. So we’ve kept an emergency fund of $1000 since 2009. A huge feat for us. Have we used it? Yes, of course, that’s what it’s for, but we’ve always replenished it within a month.

ING has recently changed to Capital One 360 so far I like it just as much and their online program has been great. My parents also recently opened up an account with them and love how easy it is to use. I’m sure it’s more about having a separate bank than WHICH bank you use. But there was something about logging on to ING and seeing the words “Welcome Saver” that made me feel like an adult. Also, you can set up savings goals and it makes a neat little graph to encourage you. 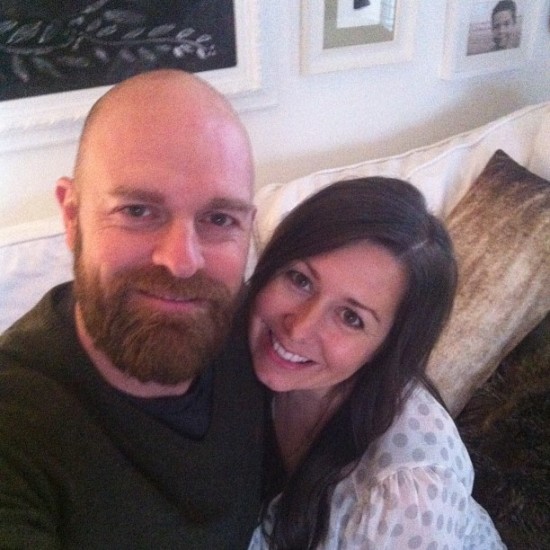 As wonderful as it is to be debt free, it’s even better to become debt free as a couple. Out of pride I’ll tell you that with my mathy skills and ability to eat leftovers like a jailed maniac, I could have had this debt paid off sooner if I were making all the decisions by myself. But, my husband, with his laid back personality, made it fun. Instead of years of nothing extra and a house on complete lock-down while we paid off debt, he reminded me that it’s worth it to go out to dinner, to buy the bottle of wine, to go on a little overnight trip. Paying off debt in agreement as a couple and taking longer is better than paying off debt by a bureaucratic tyrant and doing it quickly.

That’s what worked for us. I know some of you use credit cards and then pay them off every month and that is great for you. I will never do that because I will never have a salary. I think that’s a much easier option when an employer pays you exact same amount every month, guaranteed forever. Unfortunately, the problem with having a salary, like any form of income, is that you don’t control if you lose your job or if your business unexpectedly hits trouble. We had a secure job too, before we got into debt, but the employers didn’t follow through like we were all so sure they would.

I hope this story is encouraging to you, especially those still paying off their debt and feeling like it’s never going to happen. I felt like that for a long, long time. Remember, when it comes to paying off debt, even standing still is better than going backwards. And sometimes going backwards is out of our control, and sometimes it’s not.

Phew, that was a lot of words. Your turn. Comments. They are there for you, they are the best part. Share it up….

*that Capitol One link is a referral link, if someone clicks on it and opens up an acct and deposits $250 I get $10 for referring them, it’s open to all Capitol One customers, you can refer your friends too!

** Lastly after a few questions in the comments, I want to make sure you know that for the first year or two my husband was working his franchise, then for the past 4 years, this blog has been a source of income (teeny tiny at first but growing every year) so I worked too and most of the money I made went directly to debt pay off. The last year of our debt payoff my husband worked at his franchise AND part-time at our church. I wouldn’t recommend it forever but we knew it was short term so it was okay.

Also, people are asking about our percentage of income going to debt. But remember, we were paying our car payment and minimums anyway but yes, those are included in the debt we paid off. Say you make $1000 and you pay a $100 car payment and $150 in credit cards, then you are already paying 25% of your income on debt payoff! (assuming you don’t go into more debt this will add up). So part of what we were paying was monthly bills we had anyway that were debt.  We just tried to up that as much as we could to pay off our huge debt as quickly as possible.