How to Make A Custom Silhouette Necklace

← The UnSelfish Art of Being Inspired A Renter's Laundry Room Makeover →

I made this necklace back in November. And I never shared it here for a reason I’m kind of ashamed to admit. It’s not perfect. Not even close. And yeah, this entire place is built around the motto “it doesn’t have to be perfect to be beautiful”. But, it doesn’t make it any easier to show my world the imperfections–up close and on Pinterest.

So I made this necklace and it’s imperfect but, I was happy enough with it to not remake each silhouette–which I now know how to do because I spent days on it trying it like four different ways–so I could redo it if I wanted but, I don’t feel like I need to.  I liked what I had enough to not do it over–and I actually wear it often. And, I get a ton of compliments on them which convinced me I really should write about how I made them, even though when you look at them close up, you can see the imperfections.  I can tell you how to make them and you can make them as perfect or imperfect as your heart desires. 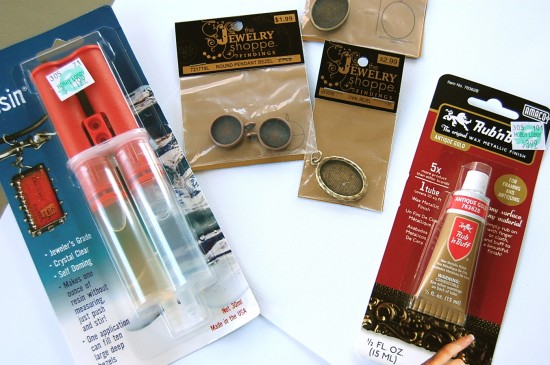 So here’s a little photo of the items you need::

1. Ice resin (there are other products but I used this) to fill number 2

2. Pendant Bezel thingy (forgive me real jewelryers for not knowing these words)

3. ? Rub n Buff was feeling lonely and wanted in this photo  I don’t think I used him on this project but you could if you want–I took these photos back in November so you know, this is what I have to work with

4. Not pictured, you will need silhouettes–we’ll talk about how to get them in a few paragraphs 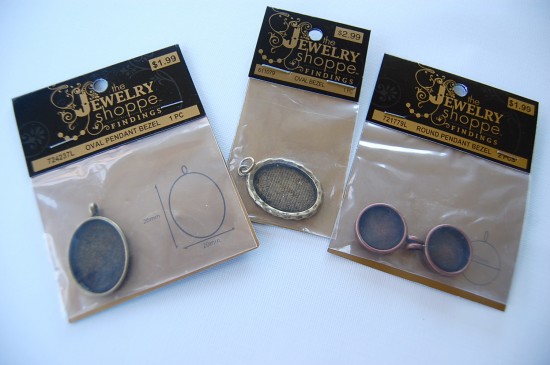 First you want to pick out some pendant/bezels.  I found these at Michael’s and or Hobby Lobby.  I tried three different kinds because I was sure this was a practice run so I figured I’d buy more of whatever kind I was happiest with.  As you can see they are only $1.99-$2.99 plus don’t forget to use your Michael’s app for your smart phone or bring up the Hobby Lobby coupon from their website for an extra 40% off. 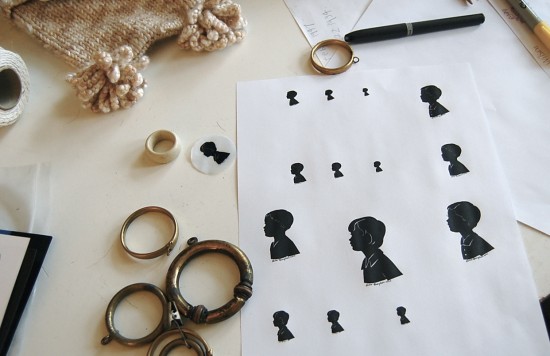 (ignore all of those brass rings, I thought I would try those but once I found the bezels/pendant holders I figured that would be much easier)

Then you need silhouettes of your children, or dog, or yourself, Kevin Bacon, or strangers–whomever it is you want to feature on your necklace, you need their silhouette. There are a ton of tutorials online– here and here are a few.  I already had custom silhouettes made by a silhouette artisan so it seemed crazy for me to make my own.  If you already have silhouettes all you need to do is pop them on your scanner and shrink them down on your computer and print them off.  Or if you don’t have a scanner, you can take a photo of your silhouettes and load that into your computer and shrink the photo down and print it off on regular paper.  There are probably a million different ways to do it, but you just want a tiny silhouette, small enough to fit into your bezel (doesn’t that sound like something a witch should have?) 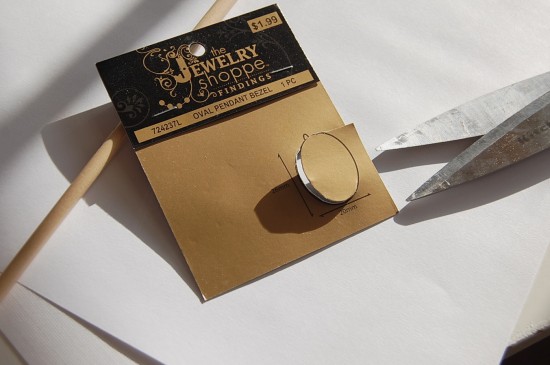 So included with the pendant/evil bezel is a drawing of the exact size of the inside of the bezel. Guard this little diagram with your very life it is your template.  If you lose it, you should just start over. Or you can pop your pendant in the copy machine and make a new template, but just to be safe guard it with your life.  And this is the part where I should have taken my time.  Because I assumed this was a practice run and also because I am the most impatient person in the United States I just cut my silhouette out really fast.  Now I know that I should have taken my time and cut a perfect oval.  Also, cutting a perfect oval to a specified shape is much, much more difficult than you might think–if I didn’t love the ovals so much I would recommend using a square or rectangle bezel/pendant whatever they are called. See my horrible cutting skills?  I popped it out and recut it a tiny bit. But gosh it’s hard to cut a really good oval.

And next comes the part that I tried three different ways.  You need to seal the paper with the silhouette so the resin doesn’t leak through and damage your silhouette therefor rendering all of your cutting skills a waste of time.  I researched and found a few different ways, clear tape, a thin coat of resin or mod podge. 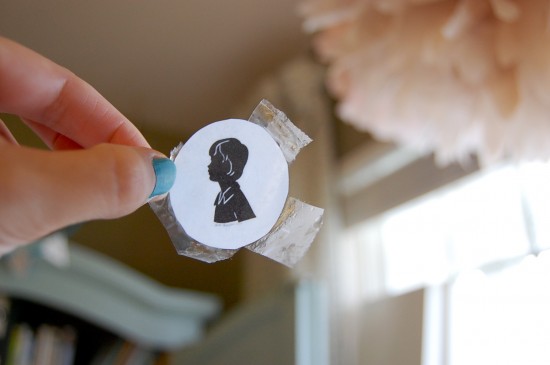 The clear tape works pretty good.  I tried it with scotch tape and duct tape and even tried to cover it with the plastic that came with the bezel. You need to first cut your paper to the exact size plus a tiny micro amount smaller than the bezel then cover both sides with a piece of clear tape and then push the air bubbles out then cut off the excess tape to get a tape covered bezel shaped piece of paper.  BUT, if you have any gaps where the tape isn’t stuck together on any part front or back of the paper you will get leakage–and it’s difficult to cut the tape to the exact shape without getting gaps. 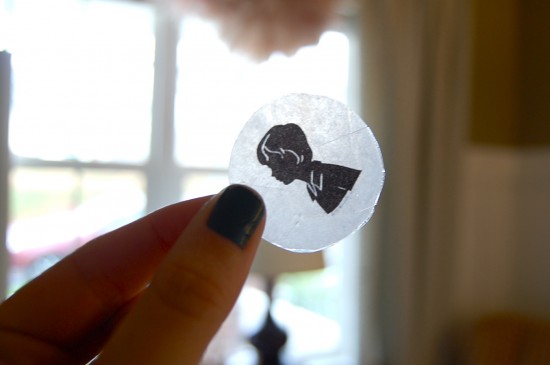 I also read that you can seal the paper with a thin layer of resin.  I didn’t like this method for two reasons. First, you have to mix a large amount of resin to get it to chemically work–so unless you are making a big batch of these you will waste resin and second, the resin made the paper turn translucent and I didn’t like the look of it. 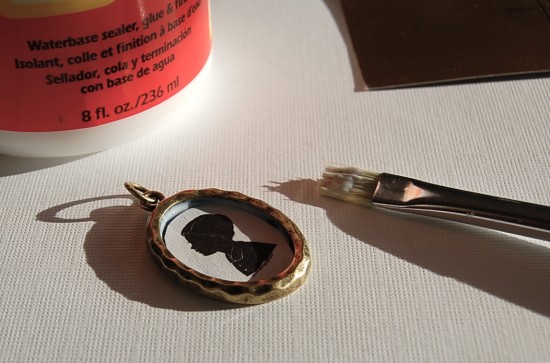 I found that mod podge worked the best–it left brush marks that you can see in a certain angle of light but it was the easiest and looked the best and dried super fast–perfect for the impatient.  And I bet if I used a different brush I could have solved the brush stroke issue.  I also asked my friend Kim who makes pendants and sells them–she uses mod podge so apparently that’s what the professionals use. 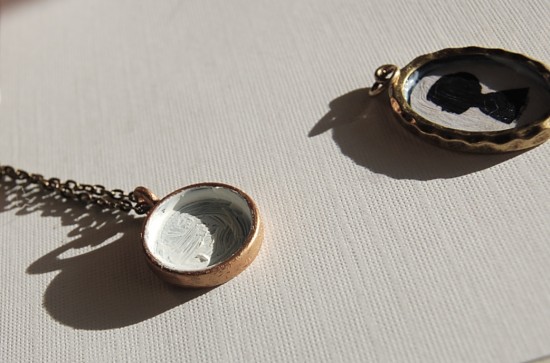 I also wanted to try  out painting the inside rim of the deep pendant. I didn’t realize how thick my paint was so when you look really close up it doesn’t look so great.  Of course, no one really looks this close up and at the time I was trying it multiple ways to see what worked the best so I could remake all my pendants the best way so I was fine messing around with the imperfect. 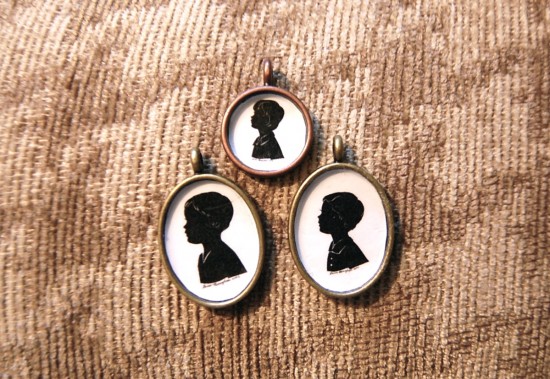 I had so many trials of these–but this is what some looked like before I filled them with resin.  Not too bad.  From straight on you can’t see some of my cutting mistakes. And really you can’t see them at all unless you get close up. 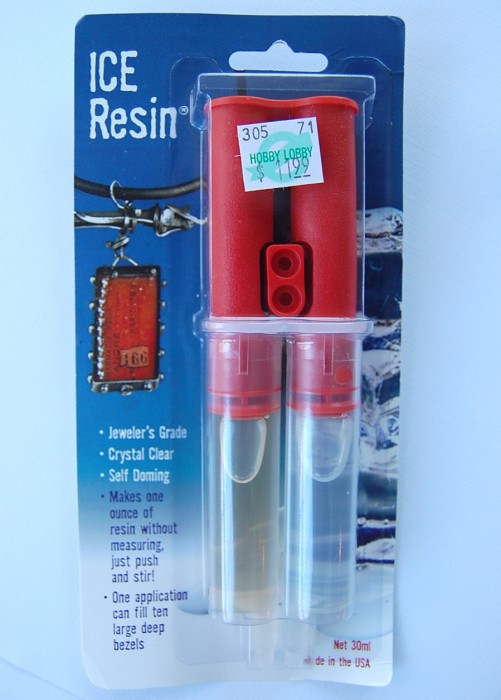 I used Ice Resin to fill my pendants/bezels. It creates a clear glass like protective cover that fills the pendant over your silhouette and dries hard.  You get to pretend you are a scientist and mix two parts together. 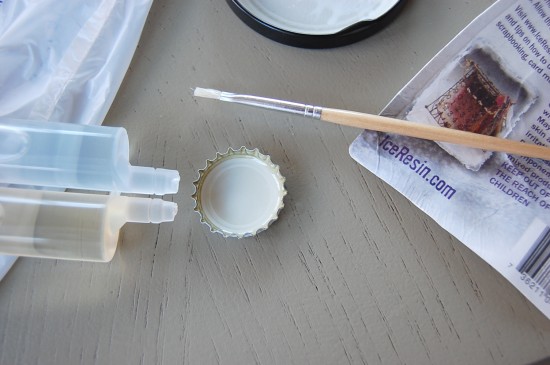 The first time I did it I didn’t follow the directions. I like to break the rules you know, mock the establishment.  It says you have to mix a minimum of a certain amount to get it to work but I only wanted to use the resin on one pendant so I hated to waste so much of it–it was expensive.  So I broke the rules and just mixed a little in a bottle cap. 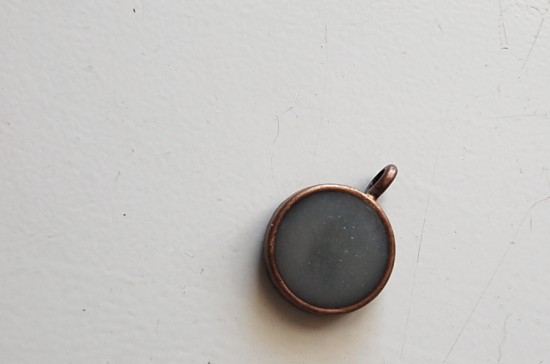 Here was my first attempt.  I was cloudy because I didn’t mix enough resin.  So then I found this video which was really helpful, click here to read the entire post and video from Elysian Studio on how to use Ice Resin.  So the second time I prepped all three pendants and followed the directions correctly. 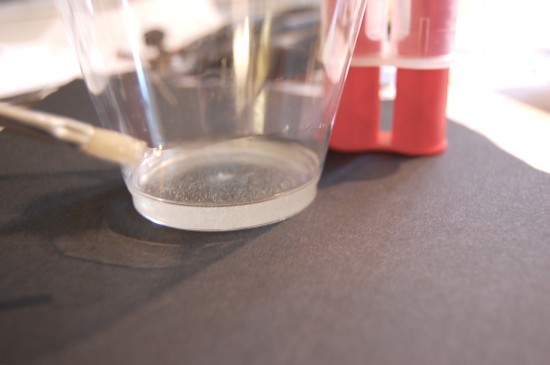 I mixed a decent amount of resin and followed the directions word for word–it almost killed me. 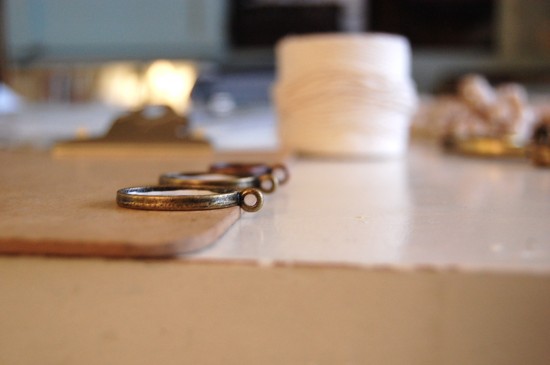 Here they are waiting patiently to be filled with resin–I put them on a little clip board so the hangy part could hang off the end so they could dry flat.  Then I followed the directions on the ice resin and didn’t touch them or breath on them or hardly look at them–they had to dry for like hours–maybe days?  I know it was hard to wait so long and that was the worst part. 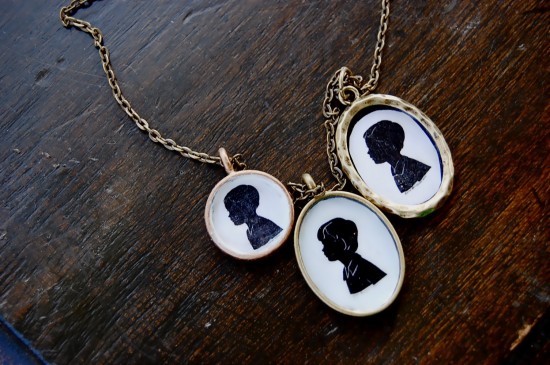 And here’s what I came up with after they dried.  I tilted them for this photo so you could see how they look in certain light.  The one on the far left is a little cloudy, and you can see brush strokes if you look closely where I put the mod podge on to seal it (next time I’ll use a different brush).   You can see my poor cutting skills on the one on the right but, remember, I was just practicing so I would know how to make them for real so that I could make real, perfect silhouette pendants. 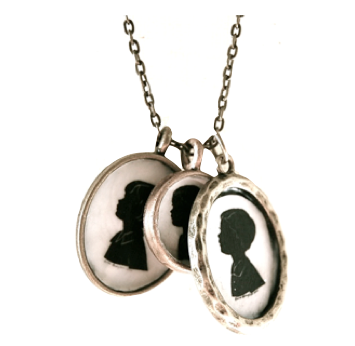 So this was my final product after my practice run.

Then I decided to put them on and wear them.  You know, just for now. I mean, they weren’t done yet, clearly, obviously, I needed to remake them but at least I could wear them around the house to see how much I liked them. Then I wore them out to run errands.  Then I wore them to church and got a ton of compliments.  I was sure to tell everyone they were just “practice” and that I was going to remake them correctly and cut better ovals less impatiently really soon. Then four months passed and I wore them every week and loved them.  The I decided that I don’t really care that they aren’t perfect and even though I know HOW to make them perfectly, I don’t really care that mine aren’t perfect.  Then I decided to take close up pictures of them and share them here as a final product and risk someone telling me that I should be ashamed to show such imperfection to the world (it has happened before). 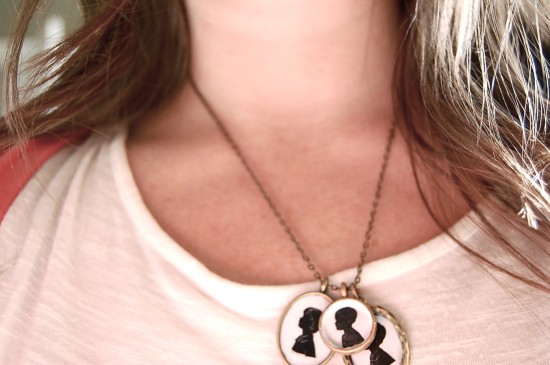 Do you have any idea how hard it is to take a photo of yourself trying to focus on a tiny necklace all while trying not to make your neck look old?  I really do love them. 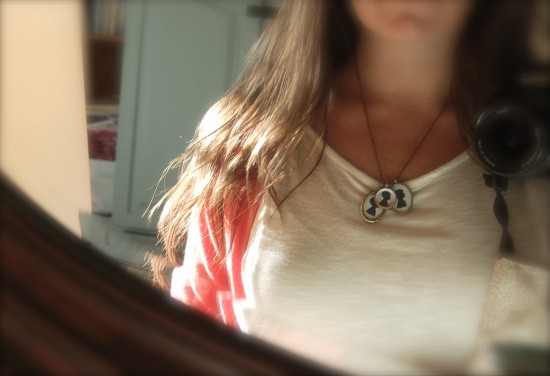 And see?  This is how most everyone sees them–from afar.  Really they are good enough. And maybe one day I’ll be bored and make them over perfectly. 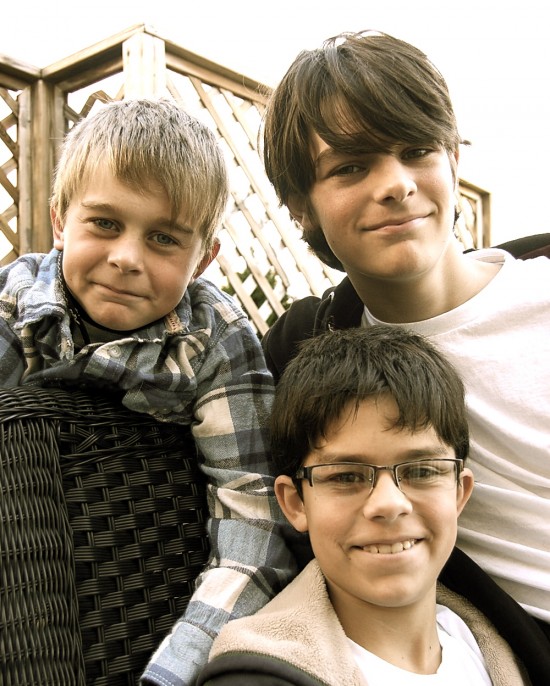 These boys are getting so much older and handsomer and funnier and fun to be around and grown up. It’s nice to wear a little reminder of their pixie-like profiles around my neck.  Even if my neck does look old.