The Life and Times of Lego Blocks

We love and hate them. I only really hate them when I step on their razor sharp hard as steel tiny but you are gonna wish you were dead edges. 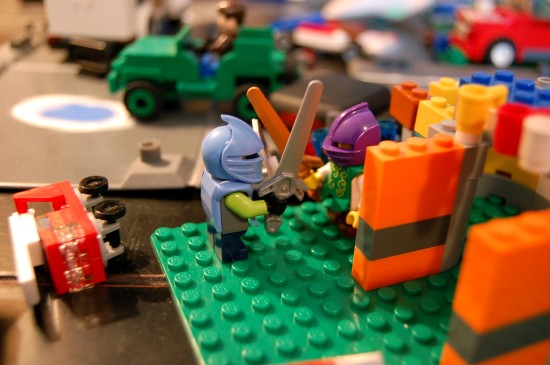 Tiny Twig started a little conversation about Legos the other day on twitter:

Then Heather chimed in:

And Caroline added some ideas: 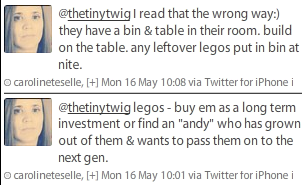 I completely agree with Caroline that Lego blocks are an investment.  You can’t play with them without using your imagination and getting creative~toys don’t get much better than that.  And these days at 13, my oldest has outgrown toys and only plays with sports equipment, and the only toys that our 9 and 10 year olds play with are Legos, and not so much lately.  Did you hear that?  My kids are almost done playing with toys!!! Legos are all that’s left and they are hanging on by a thread.  And it makes me sad.  These boys are growing up so fast and now I don’t mind seeing a few stray Legos.  I might even be guilty of sprinkling a few blocks around the house hoping to remind them to play with them. 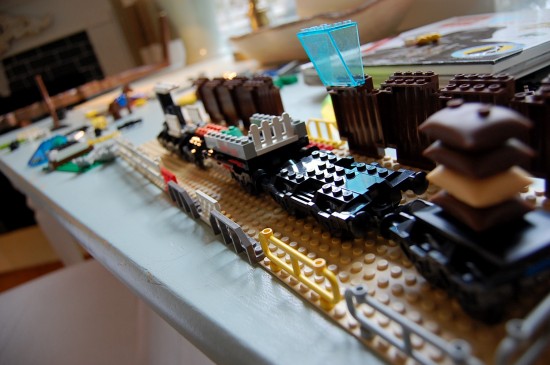 While yard saleing {my favorite sport} with Angela on Saturday, we hit a house selling “fill a gallon bag with Lego blocks for $1″~ jackpot!  I brought a bagful home and crossed my fingers that they would work their magic and sure enough, within the hour our two youngest were all about the Legos again. 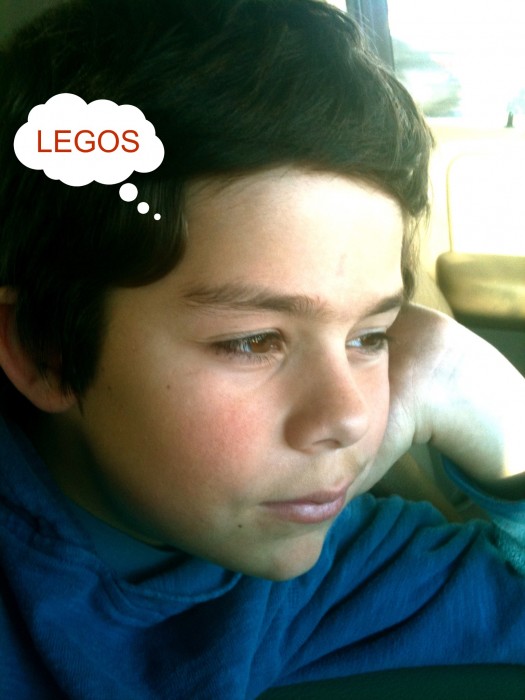 A few years ago I finally gave in and accepted the fact that the easiest way for the boys to play with Legos is to dump them {the Legos, not the boys} in  a wide mouth container so they can sort through their collection IN the container instead of dumping it on the ground.  We moved from a metal bin to a large lined laundry basket and now it’s so full that they still can’t look through everything but, it’s easier than a tall narrow container. 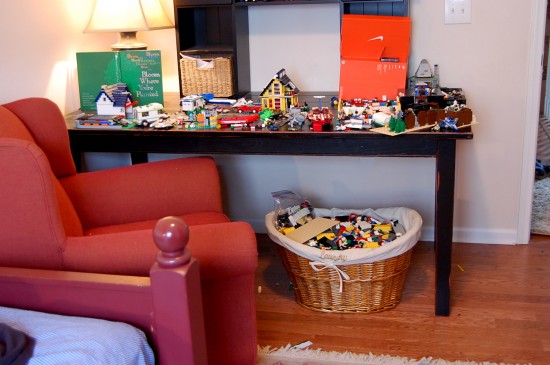 So here’s Lego central in our house. Nothing all that life changing. The fella up there with Lego on the brain is the one most addicted so he keeps most of them in his room.  We brought in a table so he could have a big building surface and there’s the basket full of Legos.  As they’ve gotten older the Legos are downstairs less and less.  Sometimes when we get in the mood they’ll bring the basket downstairs and we’ll dump it out in the family room and I’ll pick out the rouge marbles and hot dogs ends and used band aids.  Then we have a contest to see how fast we can clean it up.

What about you?  How do corral Legos?  Do you love or hate them?